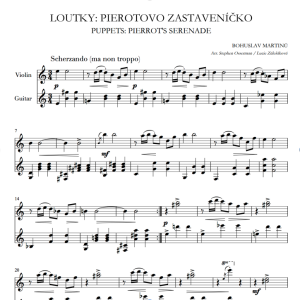 Since forming the Lyrical Strings Duo in 2009, Lucie and Stephen have performed in a wide variety of venues ranging from churches to rock clubs, from intimate living rooms to outdoor festival stages. In 2015 they released their second CD, On An Overgrown Path. Featuring their original arrangements of classical music from the Czech, Polish, and Ukrainian traditions, the CD explores the intersection of folk traditions, romanticism, and storytelling in the instrumental music of 19th and early-20th century Central/Eastern Europe. The album has earned the praise of leading Czech Music scholar Professor Michael Beckerman, has been played on Classical Radio stations throughout the United States and Canada, and was selected as the “Delight of the Week” by the Music Director of a National Public Radio affiliate in Maryland.

Lucie is a Czech violinist born in Prague. She has appeared in both the United States and Europe as a soloist and chamber musician. She has worked as an orchestral musician in central Europe, and toured as a member of the Gustav Mahler Jugendorchester directed by Claudio Abbado.

Since settling in the United States, Lucie has performed solo recitals in the embassies of Poland and the Czech Republic among other notable concert venues in the DC metropolitan area. Now living in Portland, Lucia serves as Concertmaster of the Willamette Falls Symphony of Oregon City. She is also Assistant Concertmaster of the Salem Chamber Orchestra. She collaborates regularly with Willamette Master Chorus (Concertmaster), Oregon Repertory Singers, Bach Cantata Choir, Cascadia Composers and substitutes with Portland Opera and the Portland Chamber Orchestra..

She holds degrees in violin performance from the Prague Conservatory and Catholic University of America as well as a degree in violin pedagogy. Her principal teachers were Frantisek Pospisil, Howard Beebe and Robert Gerle. She also attended the National Symphony Orchestra Institute on full scholarship where she studied with Luis Haza.

Lucie is a busy freelance violinist performing an eclectic schedule of concerts and events. She is equally at home playing a Shostakovich string quartet at Portland’s Holocene club, a live movie soundtrack with Filmusik at the Hollywood Theater or Verdi’s Requiem at the Arlene Schnitzer Concert Hall. An experienced session musician, she has recorded for such local Portland artists as Matt Sheehy, Ashia Grzesik, Naomi LaViolette and many others.

She has been part of many festivals such as Siletz Bay Music Festival, Astoria Music Festival, Portland Summerfest, PDX Pop Now, Salem Art Fair and March Music Moderne, to name a few. She is active in community outreach including recent children’s concerts with string quartet at Community Music Center, Ethos and in small rural schools in such towns as Fall City and Monmouth, OR.

As a chamber musician, Lucie performs with pianist Naomi LaViolette and cellist Erin Winemiller in the Fleur­de­lis Trio, and with guitarist Stephen Osserman in the Lyrical Strings Duo.

Since Stephen’s days as a student he has loved collaborations with other artists. Through both his earlier work combining traditional guitar repertoire with dance, poetry, theater and more, and his more recent projects arranging music for the Lyrical Strings Duo, he has always aimed to bring classical guitar to new places and pull in new audiences in the process.

In addition to performing regularly with Lyrical Strings Duo Stephen has been invited recently to appear with the Willamette Falls Symphony and Salem Chamber Orchestra, as well as regional string quartets, and other chamber groups.

He holds a BA in Music from Yale College and a Master of Music in Guitar Performance from the Yale School of Music, where he studied with Benjamin Verdery, and had the opportunity to participate in master classes with guitarists such as David Russell. He previous teachers include Philip Rosheger and Juanita Oribello. 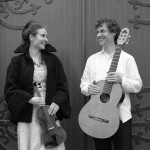